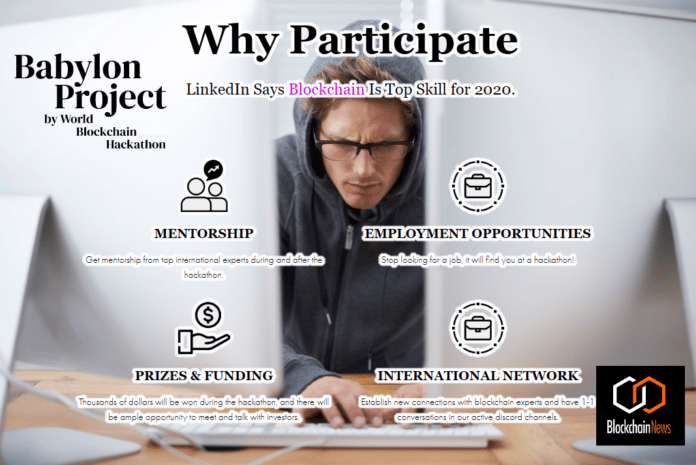 The World’s Largest Blockchain Hackathon called ‘Virtual Babylon’ lifts off at 7:00 AM PDT on Friday, October 9, 2020, when applications open and the event will close on September 30, 2020.

“Silicon Valley VC firms and other international investors are actively participating in the judging for the stated purpose of assessing fresh blockchain investments,” said Gideon Nweze, founder of the World Blockchain Hackathon collective.

The broadest vision of the World Blockchain Hackathon is a future ecosystem in which blockchain innovations become the standard backbone for impenetrably secure, fast-moving, intelligent global technologies of all kinds, from private and public industries in finance, healthcare, energy, manufacturing, and telecommunication, to government operations, national defence and beyond.

Babylon, from its history, is what many consider to be the cradle of civilization, the first time a complex societal structure came into existence by bringing together different people under one common vision. The mission of the current Babylon Project is to unite, engage, and empower blockchain builders of all skill levels from around the globe to imagine and create new and never-before-seen blockchain end products.

The World Blockchain Hackathon series has been held for three years running, organized by a team of California blockchain evangelists. Adding to the excitement at this year’s Babylon Project Hackathon, the strong potential for hackers’ innovations to attract venture capital.

The hackathon is 100% community funded.

The Babylon Project is a blockchain protocol agnostic and community focused hackathon. Participation is free and open to organizations with aligned vision.